Not always the game of basketball must be hard, all sweaty and only played 5-on-5. The game of basketball must be fund and there are plenty of games that kids will enjoy playing. Not all kids have the same athletics and because of that athletic children dominate the game without a chance for others to win or even play in an interesting way. I want to show you that there are way more non-computer games that can be played with kids basketball and a hoop that youngsters will enjoy, no matter at what skill level they are at. I believe that even adults will enjoy them, as we all love to have fun. 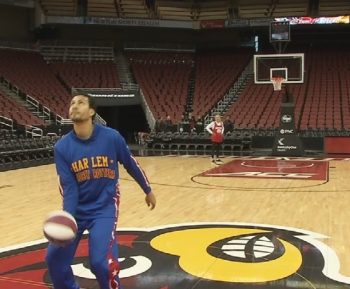 Horse is probably the most popular out of all games kids play. It’s fun and all it takes is to have a hoop and basketball. It allows kids to use their imagination in basketball shots, actually it’s a great way to let them show off. At least two players are needed and there is no maximum of who number who can join. First thing to do is to agree on order of who plays first. There is various way to decide – you can stand at the free throw line and who makes most shots starts etc.

Now the fun parts start. The first player who starts the game have to invent a shot, let him think before he starts as more creative the shot will be the better. For example, he can shoot with his eyes closed or shooting from behind back, it’s a matter of imagination what kind of shot he will take.

That way the game goes around till only one play left. If you are making a copy shot and missing it you get a letter each time, first is H, second O.. you lose after you spell the full word “H-O-R-S-E”, it means you lose after you miss 5 challenge shots.

The game continues until one person is left and this is how we have a winner.

Here is the video of NBA superstars Stephen Curry and Kevin Durant of Warriors playing HORSE:

What I love about this game that it doesn’t require a high level of shooting ability from the children. This is an ideal game for kids offering a chance of winning for everyone because of wide skill set required.

All you need is two basketballs and at least two players (there is no limit of players in this game). First step is to form a line at the free throw line or closer to the basket. First two players standing receives basketballs. The game starts after the first player shoots, if he misses, player that is right after him can “knock out” the first player by making the basket before the first player does it after rebounding his first missed shot and nailing it. If the first player makes the shoot, he passes the ball to the next payer in the line and so on. That next player tries to knock out the second player if he is still trying to make a shoot while the first player goes to the end of the line and that way the game flows. The winner is not known until there is only one player standing and knocked out all others with his accurate shots and/or quickness.

Watch video of Knock out being played on court:

This game has many known variations. It requires a single basketball hoop and minimum two players. The idea is that by making shots from various marked or predetermined spots on the court you go around the court, in other words “around the world”.

The game starts as first player makes a layup, next goes a shot in the middle of the basket and free throw line, next follows a free throw shot, 20 foot away shot from the wing, the distance keeps getting longer – 3 point shot and the final shot from the half court. Once this part is done, the player must make every shoot again just from the different direction. Starts from the half court and returns to the basket and finishes the game with layup.

Now about variations, in most cases it’s played with the rule that the player must make all the shots in a row of predefined spots, if he fails – he must start over. I have seen often that people in order to make the game quicker, or there are a lot of players, they allow player to stay on the spot where he missed his last shot and other players take their turn. The next time player gets his chance in next turn he starts from the same spot he missed his shot in the last turn of his. The spots for shooting can be placed all over the court. It’s just a matter of imagination and of course age of the kids as youngsters can’t make shots from far away.

Another variation is called “Firing Squad”, and the difference is that instead of turns, all players are shooting at the same time till all the spots on the court are finished with accurate shots. 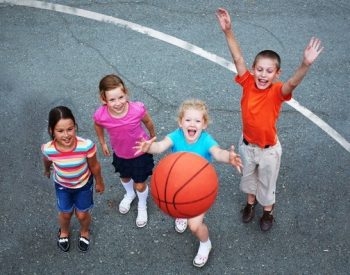 This game is a nice combination of shooting and running to get the ball. The idea is that kids shoot from all over the court, there is no pre-marked locations. The game needs at least two players and one basketball. The first player begins the game with any place he wants. If he makes the shoot next player must repeat the shoot from the same place, if he misses he gets one point, the player who is next in turn has to rebound the ball and shot from the spot he caught the ball. Player loses than he reaches 5 point mark and the winner is who is left one and all opponents are eliminated. Additional rule can be applied to this game: for the final point, I mean if he has 4 points, for the last shot he has 3 attempts. If he is not capable making the shot in 3 attempts – he is out.

This game is awesome because kids have to run around to rebound the ball and sometimes it bounces far away and often kids just are not strong enough to reach the hoop with their throw. In such situation, a player who couldn’t hit the rim with basketball are instantly penalized with one point, and player who is next in turn is going back to the spot of previous player. 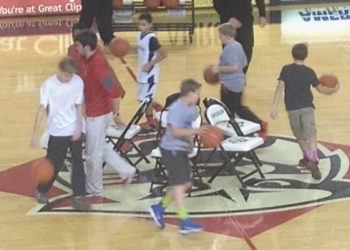 It’s similar to musical chairs, the only difference is, yes you guessed it right – basketballs. This game requires source of music, a hoop and basketballs for each player. Preparation for the game is easy, place balls in circle and have kids walk around the balls while the music plays. At one moment music stops and kids must grab a basketball and make a shot. The point is that once a player makes the shoot, he must instantly shit down to show that he finished this round. The winner is determined that way: the last player standing is out and the game continues until we have one winner.

Another variation of this game that allows kids to improve dribble is to use actual chairs and balls, hoop is not required for this version. Kids dribble the balls around the circle of chairs while the music is playing and have to stop and sit at the moment the music pauses.

I’m sure that these games will enrich your time you spend with your kids and will bring joy to them and yourself. Take your kids off from computer and have fun playing basketball!